A sneak peek at my hometown of #Cowaramup during the recent DejaMoo – Udderly Legendairy Country Fair. It’s the only place you can wear a cow onesie or a milk carton and feel totally at home! 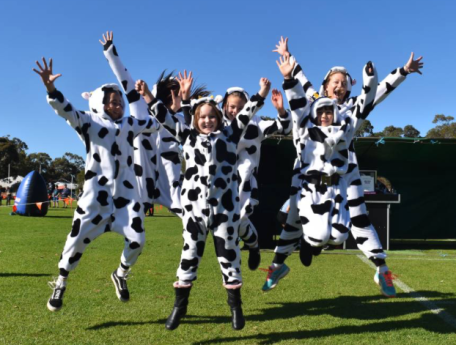 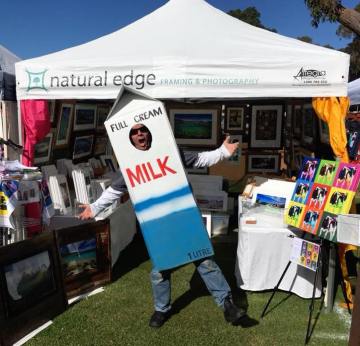 As usual when there is a Fair going on in the local hall, I take out a stand to support the Cowaramup Retailers Association and sell my books and have a chat about books to anyone interested in reading. I always have an awesome time and meet some great people, and this year I had a new book to launch!

My Butterfly House books are set in Cowaramup and I describe them as: ‘Like Bridget Jones meets the Cowaramup cows…’ They’re mad-cap fun, great for a giggle, a wonderful souvenir of our town and gorgeous hand-crafted gift for you or the reader in your life.

Who Killed The Movie Star follows the tale of Cally Minter and her best friend Sienna Devereux who we met in Book 1 where they’re trialling their new tourism venture in Cowaramup:  Murder Mystery at Butterfly House.

Who Killed The Movie Star starts the day after events of Who Killed The Bride, and so I’d definitely recommend you read Book 1 first, or you’ll be lost!

Or personally from me, signed and comes with a bookmark. For pricing and order details please send me an email to lilymalone@mail.com

I had the huge pleasure last night to join two talented Cowaramup artists, painter Kerry Sibly and sculptor Alan Meyburgh, at the launch of Kerry and Alan’s exhibition for this year’s Open Studios. 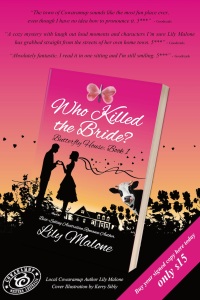 My connection to this clever and versatile pair is that Kerry illustrated and designed my Butterfly House ‘Who Killed The Bride‘ book cover… plus he lives in the same street as me, and in our street we’re always up for a party. 🙂

About 80 people came along to the launch, held at Kerry and Wendy Sibly’s house. The house itself made an amazing frame for an art exhibition. At different times Kerry and Wendy’s home has been in the lens of programs such as ‘Grand Design’; and on the radars of some of Australia’s house and lifestyle magazines. It’s an incredibly special place, filled with personal traits, tricks and treats.

Kerry and Alan made a combined sculpture that they offered as a prize on their launch night. Alan sculpted the heart, and Kerry (in his words) “added the rusty barbed wire to it”.

We were thrilled to have the sponsorship of Stella Bella Wines and the Margaret River Dairy Company for our launch. There’s nothing like viewing art, sculpture, and books whilst enjoying classic Margaret River wine and cheese!

The Margaret River Region Open Studios (MRROS) is now in its fourth year, involving artists of all pursuits from Busselton to Augusta who open their studio/shop/shed or workplace to visitors where people can peruse and buy artworks, but also talk to the artist and see them at work.

Over the next few weeks, I’m relocating my ‘writing room’ across to the Sibly’s house for several mornings a week, and I’d love to see you for a cuppa and perhaps to chat all things books, writing, and reading…

If you are in or around the Margaret River region, please look for the Open Studio signs everywhere, or visit www.mrros.com.au to see what’s on offer.

Kerry and Alan’s exhibition is No. 51 in the Guide. They’re open every day from 10am to 4pm, including ANZAC day.

I am so excited to give my blog readers the first exclusive look at the brand new (and so very beautiful) print cover for my new Butterfly House series. 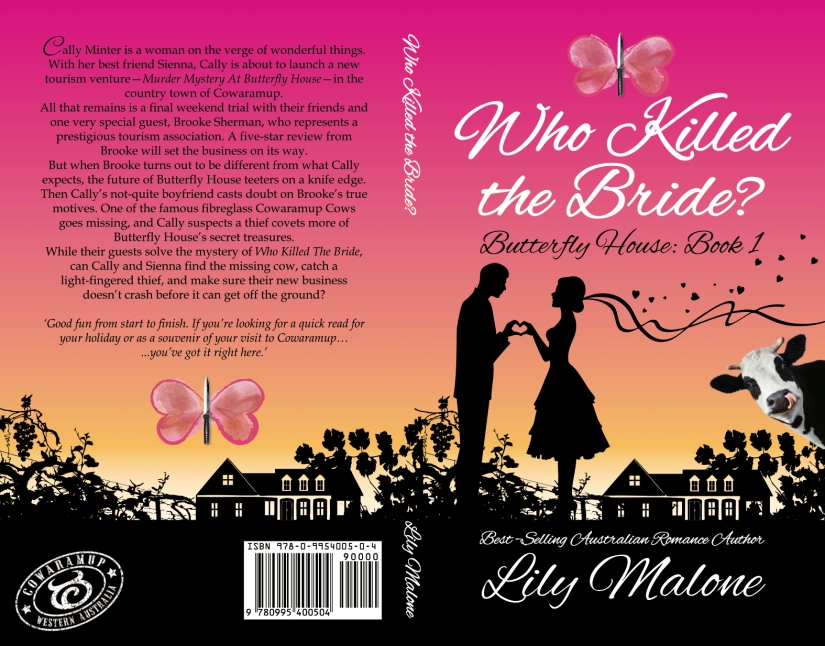 This was designed by Kerry Sibly at Mukau Giftware and Gallery in Cowaramup. Kerry got this concept pretty much nailed from the word go. When I first saw it via email on Tuesday night and showed it to my husband, he said: “Do Not Change ANYTHING!!”

I absolutely love this cover, Kerry Sibly, and I am so looking forward to future Butterfly House adventures with you and Wendy, and Mukau. 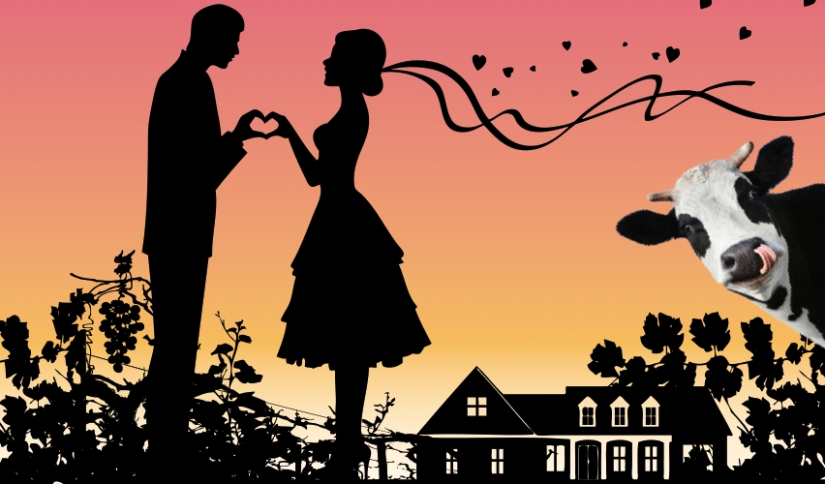 I have a new book project… as always seems to happen, it feels like it has taken forever to write, but all of a sudden I have the most amazing cover, and I’m signing off on printing plans, and I have a launch date and publishing deadline, and everything is happening at warp speed!

It’s called Butterfly House and its a real change of pace for me. First – it’s a series – which I’ve never done before and second it’s kind of chick-lit, not romance. It’s a seriously local story, set in an imaginary location in my home town of Cowaramup. If you’ve ever visited Cowaramup it’s that little dot on the map snuggled in the middle of far more famous cousins such as Margaret River, Busselton and Dunsborough… and for years and years if you blinked driving through on the Bussell Highway, you missed it.

Not anymore. Now you blink because you think some farmer just let his prize herd of dairy cows escape out the farm gate…

These days, Cowaramup is famous for its herd of life-size fibreglass cows that munch imaginary daisies on our main street, chew their cud, a-low and a-moo and lie or stand around doing their thang day in, day out. (Here are some photos of WA romance authors Jennie Jones and Juanita Kees checking out the cows during a visit with me in 2014). 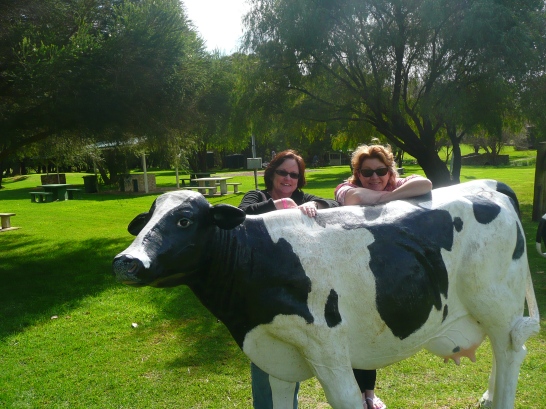 Jennie Jones & Juanita Kees with the cows during a visit to Cowaramup in 2014. 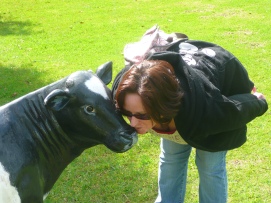 Juanita gets cosy with a calf. 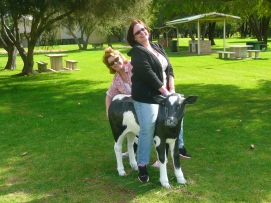 Not everyone loves the Cowaramup cows, but most people do, and I’m one of the latter. The cows have been wonderful for retail businesses who might otherwise have had to close their shop doors as our town got bypassed for the bigger, more touristy places. Now people have a reason to stop, take photos, and enjoy so much of the community spirit that makes Cowtown, such a cool town.

In the first of the Butterfly House books, Who Killed The Bride, we meet Cally Minter and her best friend, Sienna Devereux, just as they are about to launch their new business: Murder Mystery at Butterfly House.

Do you remember those old fashioned murder mysteries that were a ‘thing’ about 20 years ago? I wrote one once (incidentally). It featured Brad Pitt, Jennifer Aniston, Sylvester Stallone, Russell Crowe, Tom Cruise, Penelope Cruz, Angelina Jolie and Jack Nicholson. (Hubby played Jack).

I wrote scripts for everyone and the game ran on the clock. People had to be some place at a certain time and say something to another character. Or some other character might see them leaving the garden, or the shed, or the house (with a dripping bloody dagger in their hand) kind of thing.

In the game I wrote years ago, ‘Tom Cruise’ was found dead in the front yard of our garden in Hahndorf… and it turned out Angelina and Russell were the dastardly pair who combined to knock him off. (Russell was jealous because he’d missed out on the lead in The Last Samurai, which Tom went on to get…). We played the game and ate, drank and made very merry… we had a blast.

Butterfly House kind of takes off, where that fledgling idea began.

I can’t wait to show you the AMAZING full cover for Who Killed The Bride? Butterfly House: Book 1. It was designed by local artist (incidentally – he doubles as ‘vet’ to the Cowtown cows) Kerry Sibly who runs the gift shop Mukau in Cowaramup main street. This man is a genius!

I also can’t wait to tell you about my plans for the launch and sale of the book and how, where and when you can get your hands on a signed PRINT copy. Lots of exciting news to come including a cover reveal tomorrow! I’ll post it here first 🙂